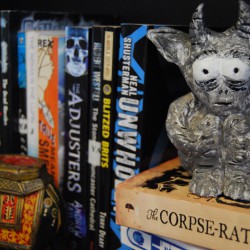 I gratefully received a copy of this book from the author for review.

My synopsis:
Alex Kavanagh is a single, failed physics PhD candidate and unsatisfied teacher still living (rather unhappily)at home at age 30. While bemoaning the end of another romantic relationship and questioning his ability with women generally, Alex bumps into an ex-lover, Lucy, whose unfaithfulness in their past encounter caused Alex great pain and generally derailed his happy existence. The story unfolds as Alex and Lucy become reacquainted and Alex discovers some truths about love and about himself.

Unlike some of the other reviewers here, I was immediately engaged by the character of Alex - yes, he's immature and socially inept and generally a bit painful to all who encounter him, but the early parts of the novel had enough humour and quirkiness to draw me in and keep me barracking for Alex despite his general un-like-ability. When Lucy enters the picture, (in a way that sets us up for a twist later in the book) I was further drawn into the story and really wanted to find out how the relationship would unfold. At this point, the characters in Alex's family were playing a supporting role and the focus was on Alex and Lucy.

Events in the second half of the novel see the focus shift to Alex and his family, and at this point I really lost interest in what was going on. It seemed to me at this point that the momentum that had been building up, was lost as the story took a completely unexpected turn into what, in my opinion, was a much less interesting realm. Yes, it demonstrated that Alex was growing as a person, but by the time the twist at the end of the book was revealed, I had moved beyond worrying about Alex.

Positives:
This is an engaging read with enough lightness and humour to keep the reader interested for the most part. Alex has enough foibles to produce interesting results in the social situations in which he has been placed. Lucy, for my money, is the more interesting of the two main characters and there is a lot of scope for the reader to try and deduce the twist before it is revealed.

Pick this book up if you're looking for a light but quirky read, and a love story with a difference.
Tweet